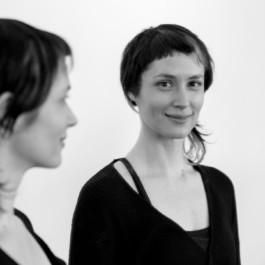 Amanda Lever graduated from the University of Melbourne (VCA) with Bachelor of Dance (2009), Post-Graduate Diploma in Performance Creation (2012), and Masters in Choreography (2013) and was awarded the VCA Arts Victoria Creative Scholarship for Outstanding Graduate.

She has previously performed for Tasdance (2009), Sela Kiek-Callan (2010-2011), Elanor Webber (2013-14) and The Delta Project (2014 and 2016). In 2015, with the support of Kingston Arts Centre and Conduits Arts Initiative, she successfully launched her first choreographic work, Hypnagogia, in collaboration with visual artist Soma Garner. She has also collaborated with Anna Seymour, Melbourne based Deaf dancer on Distraction Society, (Melbourne Fringe Festival 2016, Bay Area International Deaf Dance Festival 2017 and Australian Deaf Games 2018). In 2018, Amanda co-choreographed and performed for Anna Seymour’s work SPIN, a Deaf-led participatory dance performance for Melbourne Fringe which won the Spirit of the Festival award.

Developing a new perspective and appreciation for the relationship between sound, movement and expression is the next step forward in expanding her collaborative practice. Body Acousmonium is an improvised duet created with the support of Lucy Guerin’s residency program. It is a collaboration between Amanda and sound artist Gillian Lever and premiered in the 2019 Melbourne Fringe Festival.